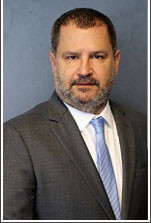 Sam Gold is a native of Wisconsin. He received his bachelor’s Degree in Business Administration from St. Norbert College (Magna Cum Laude), majoring in business and economics, along with a Spanish minor. Gold spent many years in politics and public policy in Madison, Wisconsin. He served eight years for U.S. Congressman Scott Klug (R-WI), ending as top staffer. Following that, Gold served as Director of the Bureau of Intergovernmental Relations for Governor Tommy G. Thompson (R-WI).  Next, Gold went on to pursue a career in law and graduated with his Juris Doctor Degree from the University of Wisconsin – Madison Law School.  Gold has been a member of both the Wisconsin Bar and Florida Bar since 2002.  Since admission to the Bar, Gold has focused his practice on litigating in the federal court system. In addition, Gold recently spent over two and a half years of his career in Israel, a large part of that time practicing anti-terrorism law.